Recently, I had the opportunity to talk with Justin Nava and Dave Curlee from Church Training Academy.

At the core, CTA is all about creating a smooth presentation to remove distractions from people experiencing your service at your church, so naturally, we talk about the mechanics of your church’s announcements, and how to use them as a tool to talk about who you are as a church, and not as much what you do.

I give an example of a helpful vs unhelpful announcement (around minute 11) and at the end, Justin throws me a curveball and asks me to evaluate his announcement from Sunday. Check it out: 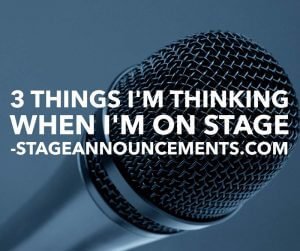 Someone asked me if I noticed my Pastor’s reaction to a particular joke last time I did announcements. Even though he sits in the middle of the front row, I hadn’t noticed.

Actually, when I’m on stage, almost everything past the front of the stage goes blurry. I’m not short-sighted, but I’m focussed on other things so strongly that I can’t usually recall the crowd reaction.

I have a few people that I trust that I will ask how people reacted because I usually can’t remember.

Even though what I’m seeing in the room isn’t on my mind, there are 3 things I think about when I am on stage:

My mind is rarely on what I’m talking about currently. I’m mostly reciting concepts from memory. I’ve learned my joke setups word-for-word from reciting them (I don’t write my script down) and I know my punch lines and timing exactly how I want to phrase them. From there, it’s mindless reciting, but the whole time I’m thinking about the segue to the actual announcement. In this moment, how do I get from here to there, and what is “there”.

For my actual announcements outside of my jokes, I know the concept of what I want to say and how I’m going to tie it into our core values, but I don’t have them memorized word-for-word.

Even if you use a written script you’re reading from, thinking about what’s coming next will keep your listener’s attention through the transition. If you got to “umm and uh…” between announcements, you’ll lose attention. (side note: Work towards not needing a written script.)

How’s my timing and pace?

Even though I’m making eye contact and looking at my audience, I don’t have very much visual recollection of the crowd during announcements, but I am very aware of how they’re verbally responding. If there’s a joke, I don’t want to talk over them laughing, and if there’s a punchline where they don’t laugh, I need to get in and ‘recoup’ so there isn’t an awkward silence.

Sometimes I ask for a direct response to the announcement using our Text In Church number, or if the ushers are handing something out, I’m thinking about filling that time with relevant information, but also giving time to complete the process.

What is the Call-To-Action?

The most important piece of every announcement is the call-to-action – the way we’re going to ask people to respond. Most of the time for us this is “Stop by the information center in the foyer” If we require a follow-up action from our announcement, and I forget to mention it, then there’s no identified way for the listener to follow up on that response.  Announcements are only valuable is they inspire a response, so I’m focussing on getting to the call-to-action.

I would love to hear your thoughts on what you’re focussed on when on stage. Leave a comment below:

In light of that challenge, and my ongoing focus of bringing practical ways to help you communicate with your church and community, below is a worksheet that you can print to help you organize your thoughts about what you communicate for your announcements and how you’ll present it based on my ebook: SnorkelFork, this book title is confusing. Your church’s announcements don’t have to be.

While this worksheet is nothing fancy, my hope is that by giving you this tool, you’ll be able to focus on creating your announcements and get the task out of the way to focus on the hundreds of other things on your plate. Eventually the questions on this page will become second nature to you, but feel free to print and use this page as may times as you’d like. 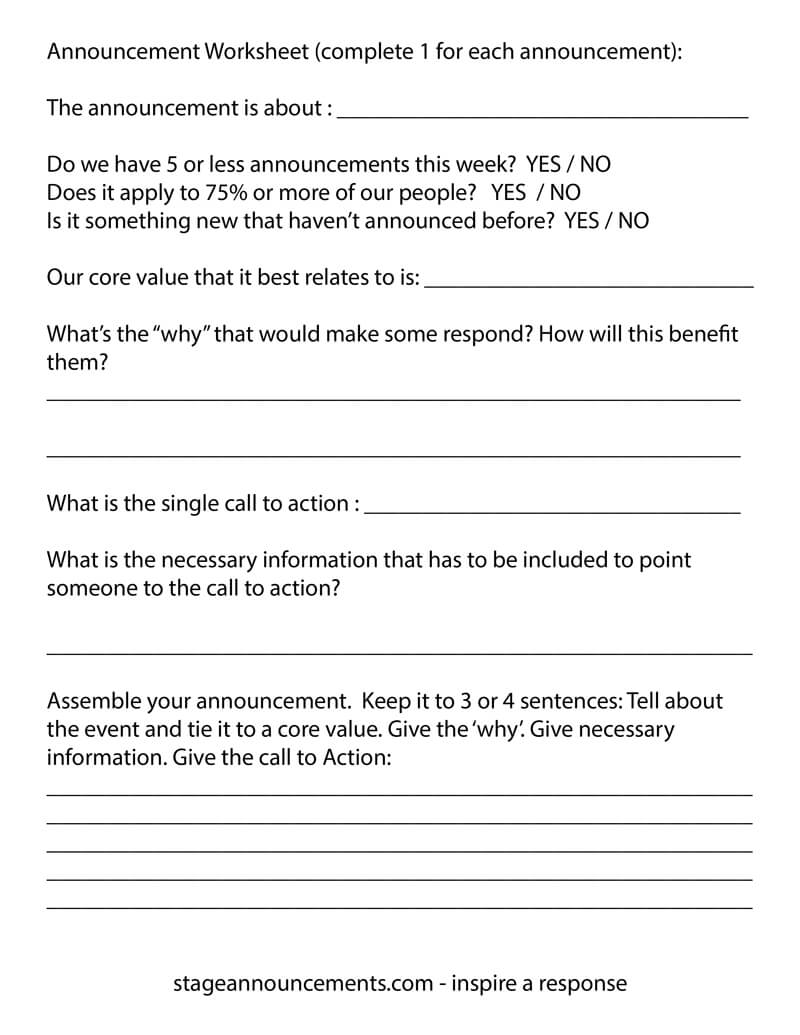